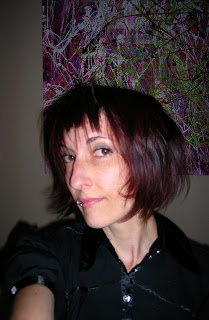 ---
Note: I interviewed Juliet via instant messaging because her spirit of spontaneity seemed to lend itself to such a format.

DS: Hello! I assure you I have no written questions or notes.

JC: Haha. Well I am in total PMS mode, so I hope my whole perspective isn't altered by that...

DS: It's actually sort of perfect. I wanted to ask you about honesty, so this will be good.

JC: I'm not a very picky judgmental type, but if there's one thing I can't stand it is fake-ness! So there's really nothing fake about me - but on the other hand, by some people's standards, I am a too-much-information sharer.

DS: You are giving good answers, and I haven't even asked a question yet.

JC: I'm a blabbermouth. Plus which I am brimming with mixed feelings about most things, including myself and relationships and my poetry!

DS: I feel the same way, though I don't know if it helps to mention that.

JC: Sure it helps because I don't understand people who think every little thing is awesomely perfect. I know I have a passion for poetry and I like my poetry, but sometimes I feel like so many of my poems are variations on the same topic.

DS: What topic is that?

JC: Well lately it's my brain wanting to grow stronger; my brain wanting to attack or drown or vomit out weaknesses and exert or empower or rise up strengths? There seems to be a lot of sea creature imagery, water imagery in general, and funereal imagery - so I guess it's semi-related to pieces of me having drowned or died and figuring out what pieces can still swim... and hopefully swim even stronger and more powerfully than the misshapen death sinkings (and also, not in any kind of direct way, but on a side note, maybe lashing out against some of the end of my relationship with my ex-husband and our divorce).

DS: I wondered how much of the horror in your poems--sometimes disturbing, sometimes fun like an "Evil Dead" movie--comes from how you want to deal with pain (physical, emotional, etc.).

JC: I like horror movies and that kind of imagery; I'm also overwhelming over-the-top emotional.

DS: But it doesn't come across as over the top.

JC: Well good. I'm also really bodily oriented in both positive and negative ways - not about other people's bodies, but about mine. Maybe it seems over the top in a way to me, because my family, although very intelligent and loving and caring people, are not as into in-depth conversation as I am - and I think that's part of the reason I often feel compelled to express a lot of my thoughts/feelings through poetry. Plus they think a lot of subject matter is “inappropriate” and I disagree so I'll spew it out if I want to.

DS: One of my favorite horror directors is David Cronenberg, who is so body-obsessed. There's some Cronenberg in your poems, I think. I was thinking of “The Fly,” in particular, because it is about a body rebelling against itself when a person seeks immortality.

JC: I saw “The Fly” and “Dead Ringers” long ago, and I really liked them, especially “Dead Ringers.” I like things that would creep many people out or gross them out (but that's not WHY I like them).

DS: “Dead Ringers” is creepy because the male gynecologist invents tools that are made for how a woman's body is SUPPOSED to be, according to the doctor.

JC: Every time I have a bad dream and tell my mom about it, she tells me it's because I watch too many horror movies. 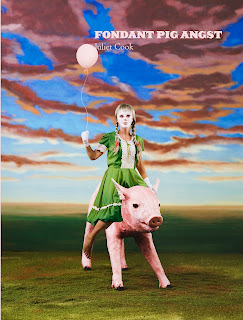 DS: Some of your poems are more like allegories because they have movie-like images. They might not seem overtly realistic, but the images make me uncomfortable, nonetheless. Your poems in POST-STROKE are more realistic because I picture you telling your true story.

JC: Some of my earlier poems fuse together real-life experiences with non-real life horrific-ness inspired by thoughts/feelings etc... As for POST-STROKE poems, I'm not sure how best to describe them, even though they make sense to me. They're shorter than most of my poems used to be. Another little way in which they differ is some of the word usage. Tons of food words used to infuse my poetry. Oddly, food words are an example of these easy little words that my brain cannot easily think of these days. The part of my brain most affected by my stroke must have been this part of things you learn when you were a kid, because big words still spurt out fine (yay) - but I have serious issues with food words, names, household items, stuff like that... Even colors! I have to concentrate hard to get color words right.

DS: My mother-in-law had a stroke in her early 50s, and she would often substitute words in unusual ways. I related to your poems more because of that. Did you substitute similar-sounding words in your poems before the stroke or just after?

JC: I think most people who talk to me in person would have no idea (at least not quickly) that I'd had a stroke because I've gotten to the point where I am good at substituting some basic word I can't think of with another word - even though sometimes it annoys me that it's not quite the right word. A BIG word to use in a poem will spurt out of my head and FEEL right, but I'm not sure what the word MEANS. I'll have to look it up in Dictionary.com, and occasionally it won't make the right kind of sense, but USUALLY it will. Odd, eh? Another odd word-oriented issue with my brain is that oftentimes, I can't think of some easy little word, BUT my brain can visualize its first letter and relative length - and sometimes if I write down that first letter, then the word comes back.

DS: Did you have poetry in your head while you were still in the hospital? Maybe it was there but you couldn't write it down.

JC: I remember when I was still in the hospital telling me mom that I had all these writing projects to work on as soon as I got home, and she got this weird look on her face and made some remark about how my reading was going to be a little slower for a while, and I didn't believe her, and she handed me a magazine, and even the letters made no sense. I couldn't spell my own name. I still had poetry in my head but no way to express it.

DS: I am trying to imagine what that would be like...

JC: It was tough, BUT I honestly think that my passion for reading and writing and poetry is what led to a pretty good recovery. I think a lot of people in a time like that would maybe go to therapy but watch TV at home, whereas I repeatedly worked on trying to read no matter how long it took.

DS: You mentioned that you have mixed feelings about your poetry. How do you decide how/what/where to submit?

JC: I don't dislike my poetry pieces (I just question the semi-repetitive content on a larger scale). If I feel good about a poem, I'll start submitting it right away. However, I don't write as much as I used to (because everything about me is slower), so thus I don't submit as much as I used to.

DS: How has it been to put together your second manuscript?

JC: It's an ongoing process (adding poems, removing poems, changing order etc...). Overall I quite like the manuscript, but I'm a bit nervous it might not be any press’ style. My first manuscript was published back in 2008 - so one thing that means is the content of my second manuscript is both pre-stroke and post-stroke. I don't think that's a huge deal but I recently had an editor suggest that my older work was better (in terms of more HIS style), which is no big deal, which is fine (everyone has their own style) - but I will admit it made the insecure part of my brain wonder if most people might feel that way.

DS: As a publisher, you have found people who are distinctive, but they might not be considered marketable based on a publishing business model. How are you able to put out the chapbooks you produce?

JC: I design the chapbooks on my computer and print them on my printer, one by one - and then do my hand-designing. It's quite time consuming and frankly, the printing/designing expenditures slightly outweigh the money I make selling them. 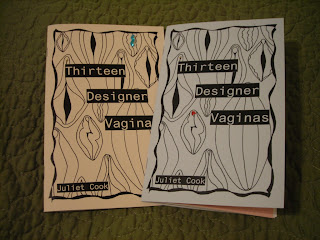 JC: The main reason I started my online lit mag is because I can't afford (money-wise but also time-wise) to create a lot of print chapbooks. One thing that inspired me to start Blood Pudding Press (the print chaps) is because I had created a chapbook and didn't feel like submitting it for years during which it might or might not be accepted, so I decided to publish it myself, BUT even though I was going to start by publishing my first chapbook, I planned to publish others too, but first I wanted to make sure I could do a decent-looking job. I also think it is important for poets to work on not only their own writings, but also reading (and ideally publishing) other poets too.

DS: What do you think will be the “next big thing” in poetry (yours or poetry in general)?

JC: Hmm... I kind of hope poetry doesn't turn into performance art - because even though I like some other people's performance art, it's not MY way of expressing myself - but I guess that's a possibility. I don't think poetry is ever going to be very popular in a mainstream sort of way, and that is FINE WITH ME! It's interesting how it's not very mainstream, yet there are SO MANY different poets - and SO MANY different styles of poetry. As for MY poetry in general, I'm not sure, but I am excited to find out!

DS: I've told my students about getting books or poems published, and they wonder why I still work. I tell them I've made maybe $100 in 10 years.

JC: Haha. The word “zombie” appears in several of my semi-recent poems, in relation to my brain feeling zombie-fied. This has been a fun IM session; yay!

DS: It has been fun.

JC: Anyway mister, I'm getting off here for now; talk with you later! P.S.: Only one other guy IM'd me during this process, and he was ignored. 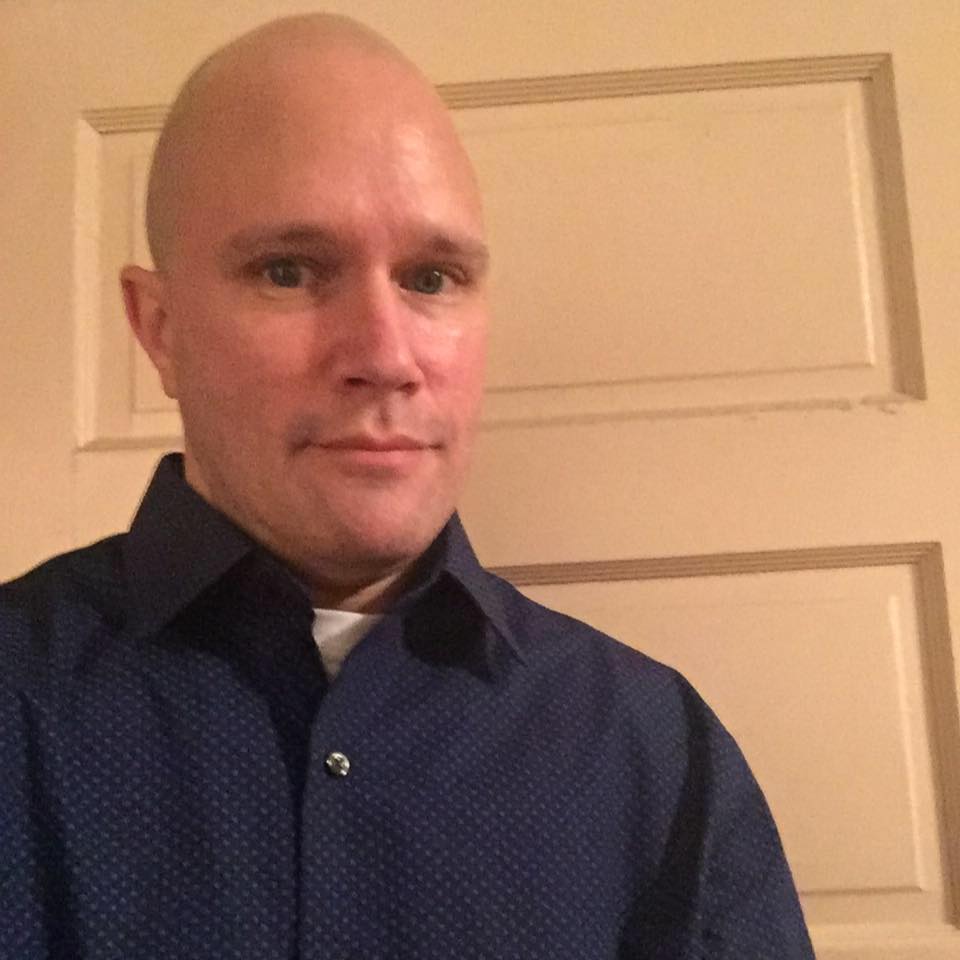